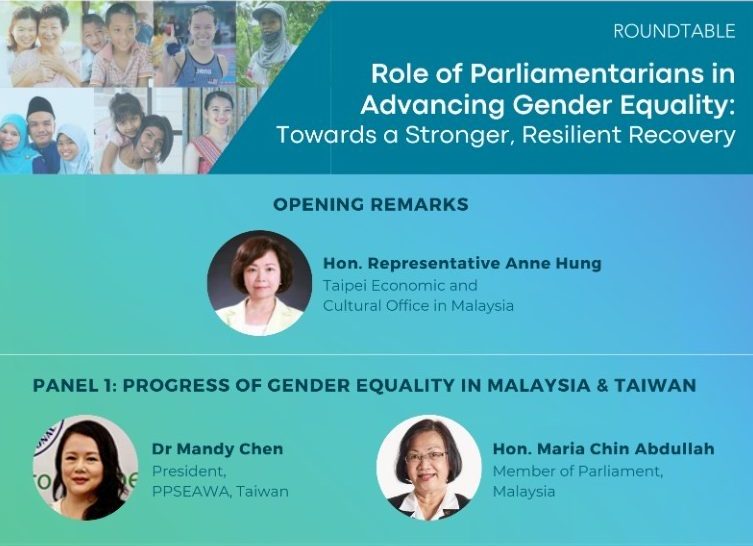 PANEL 1: Progress of Gender Equality in Taiwan and Malaysia

Dr. Mandy Chen is the President of the Pan Pacific and Southeast Asian Women’s Association (PPSEAWA Taiwan). She is a medical doctor with extensive experience in multiple medical institutions in the United States. A long service advocate for gender equality and women’s empowerment, Dr. Chen’s work in PPSEWA focuses on the implementation of the SDGs through the promotion of gender equality in the areas of women’s health and well-being, high- quality education and women’s economic empowerment. As President, she actively engages PPSEAWA Taiwan with other NGOs at UN and other international platforms. to discuss issues and cooperation. Dr Chen is a strong advocate of the civil society movement which she believed can better implement the SDGs and facilitate positive development in society.

Hon. Maria Chin Abdullah is a Member of Parliament in Malaysia. She is also the Deputy Chair of the All Party Parliamentary Group, Malaysia – SDGs (APPGM-SDGs) and a member of the Parliamentary Caucus on Reform and Governance.
A women’s rights activist with more than 30 years experience, she continues to play a key role advocating for gender equality. Her work is grounded within the realities of marginalised communities, low-income women and indigenous communities. A strong advocate for women’s political participation, electoral and institutional reform, she led the Bersih 4 & 5 rallies for free and fair elections. Just before Bersih 5 rally, Maria was detained without trial under Security Offences (Special Measures) Act 2012 (SOSMA) for 11 days in solitary confinement.

Mei-Nu Yu, a human rights lawyer and a former legislator, has been engaged in the women’s movement for more than 30 years and has spared no effort to improve the status of women in Taiwan. She was elected as a legislator-at-large of the DPP from 2012 to 2020, serving as a convener of the Judicial and Legal Affairs Committee, and passed many bills on transitional justice, judicial reform, prison reform, and human rights protection, She was awarded the French Legion of Honour in 2020 for her long-term defense of human rights and promotion of gender equality.

Hon. Liu Shyh-Fang is a Legislator in Taiwan’s Legislative Yuan having served in the fifth, ninth and currently in the Tenth term. She is also the Chair of Digital Information and Governance Innovation Association of the Legislative Yuan. She has held several distinguished roles in government including as the Deputy Mayor of Kaohsiung City Government, the Deputy Secretary General of the National Security Council, the Deputy Secretary General of the Office of the President, the Secretary General of the Executive Yuan. Before her service in Government, Hon. Liu Shyh-Fang was a Deputy Magistrate of Taichung County. She also served as the Managing Director of the World Games 2009 Kaohsiung Organising Committee.